I am so pleased to announce that my jewelry is now available at Gallery Boom in Tumwater, WA. 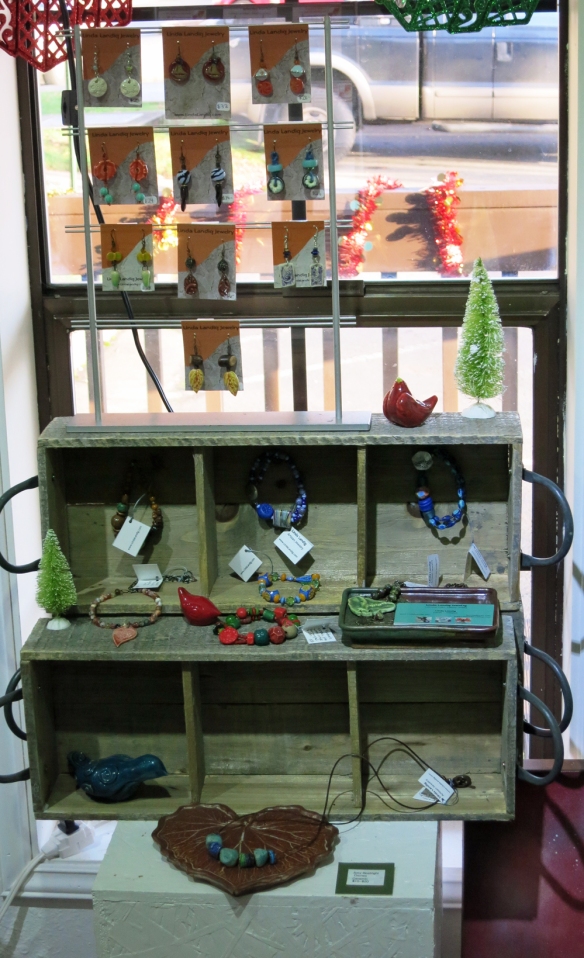 This is my display, near the front window (see picture above).  The earrings, bracelets and necklaces all have handmade ceramic components, both my own ceramic beads and pendants, as well as the work of other ceramic bead artists. You’ll also find lampwork glass and various textile accents in my work, as well.

The photo below shows my earring display.  There was a strong backlight coming through the window, so it was hard to photograph with accurate colors. 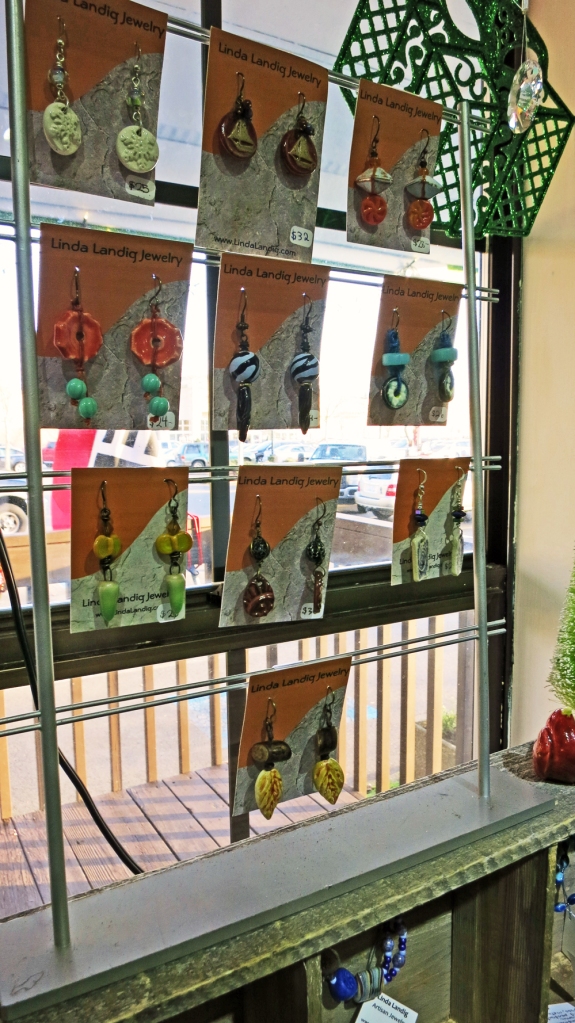 I added some tacks to my usual wooden box displays, so I could hang up some of my bracelets.  A few days ago I made the Christmas bracelet you see in the center of the photo.  It was fun to make and it’s fun to wear!

My jewelry is the best company at Gallery Boom!  I want to share a small selection of all the artwork you can find there.

Jewelry is available from several artists 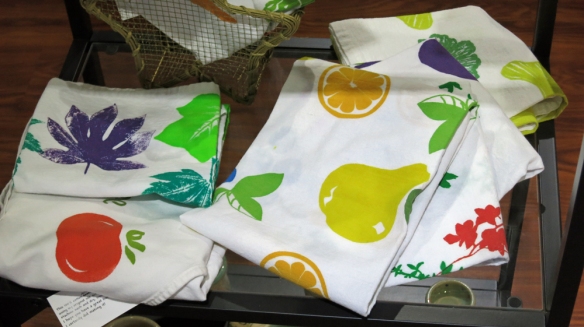 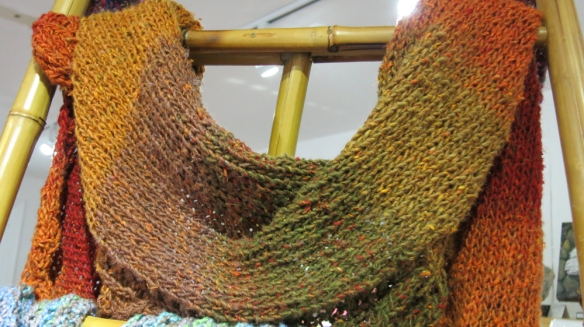 Swoon! My favorite colors are featured in this knitted scarf. 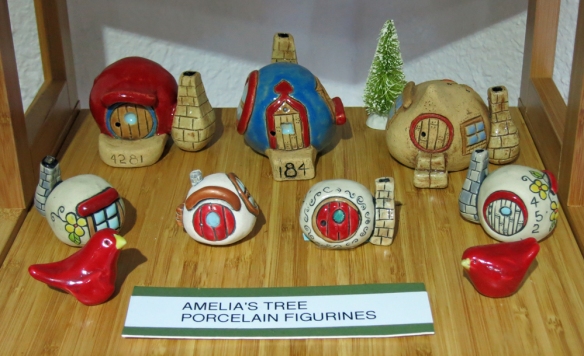 And this is just a partial selection of what is available!

If you are local, I hope you’ll come check us out.  Regarding that….Gallery Boom is on the far side of the Fred Meyer parking lot, in Tumwater.  It is between the building that houses Starbucks and the building that includes Panda Express.

Gallery Boom is in the bright blue house, with the whimsical paintings by owner Christine Malek. 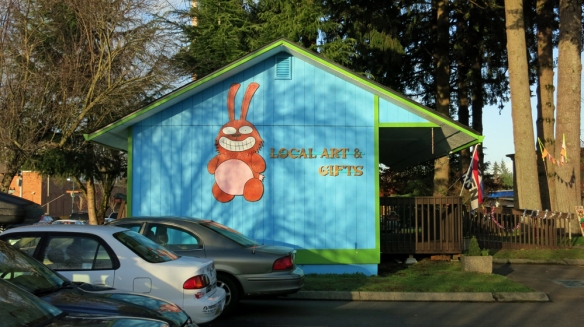 The gallery is a great place to wrap up your Christmas shopping ,while supporting local artists.  See you there!

I am always delighted to read your comments!   Hope to hear from you.

We recently visited a small town, north of us, called LaConner.  The town has a reputation for many delightful art galleries and boutiques.  The weather was gorgeous and we enjoyed meandering from shop to shop and then stopping at a small pub, overlooking the water, for a lunch of fish and chips.  After lunch we strolled to the end of town and found an old, abandoned warehouse that was truly a photographer’s delight.  Technically these are not macro shots.  They are close-ups.  But whatever–I hope you enjoy them.  The last picture steps back from the warehouse to give you an impression of the size and overall appearance. 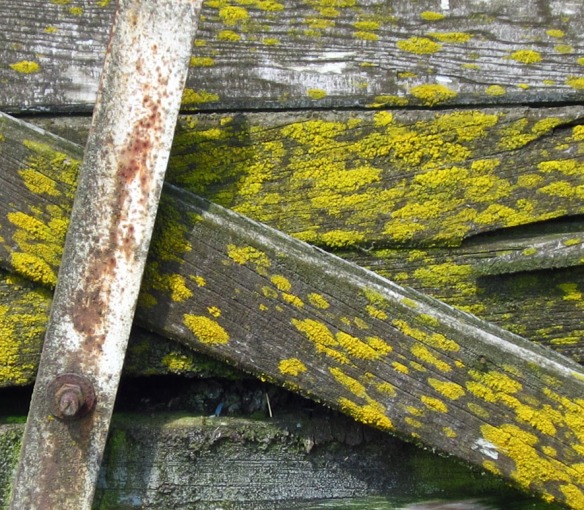 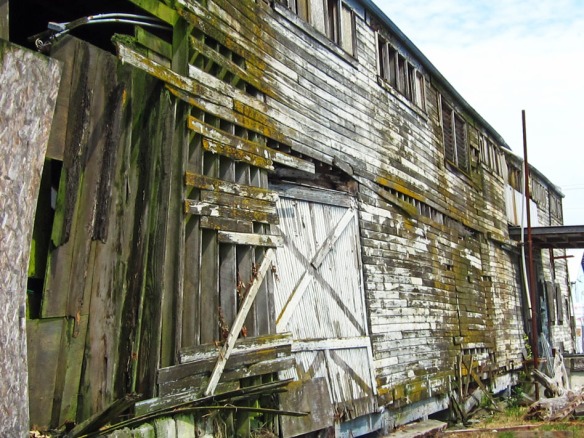 A Grasshopper in the Dahlias

I was taking macro photos in my friend’s garden when she noticed that a grasshopper had found a comfy spot in one of her dahlias.  I zoomed in and here are the results.  I wish I could have such a lovely space in which to sit! 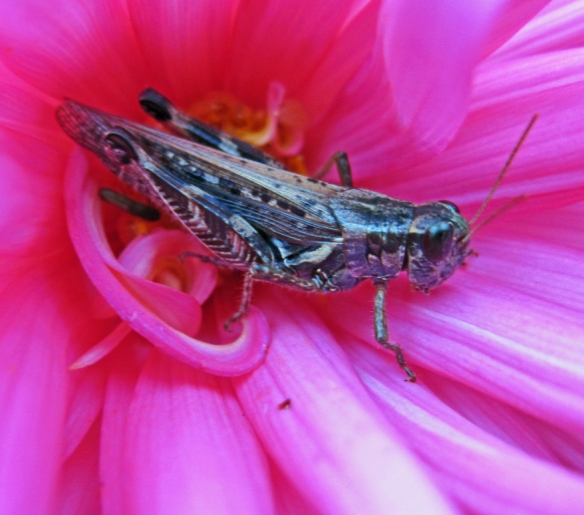 Grasshopper in a Pink Dahlia

I have a small collection of orchids on my kitchen window sill.  I water them when I remember, but I don’t fuss over them.  Two are blooming now.  The blooms last a month or more.  I had one orchid that bloomed from the beginning of Dec. until the middle of July this year! 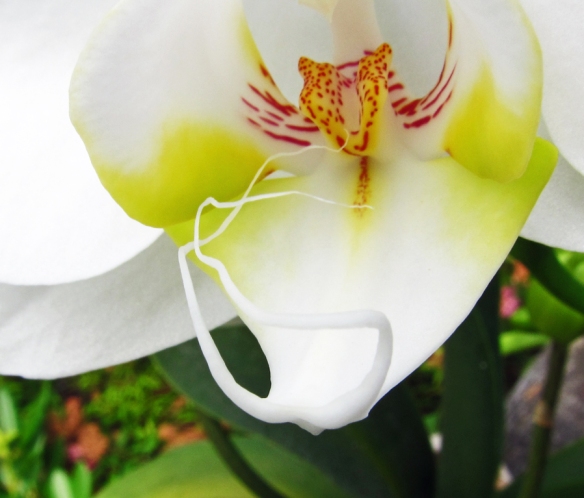 I went blueberry picking last week.  I’m not very fast.  My friend filled up two cans in the time it took me to fill one.  But I enjoy getting out and picking berries and then having fresh berries for breakfast smoothies and muffins!  I was struck by how beautiful the partially ripened fruit was, with its greens, magentas and blues. And I love the little “frill” at the top of each berry. 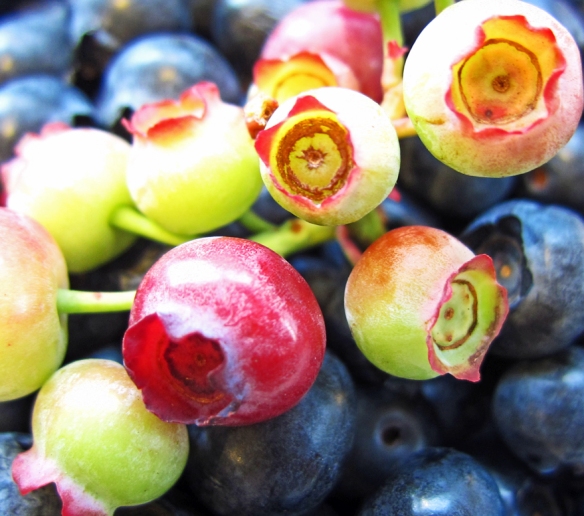 Check out those colors!

The colors make me wish I could paint!

And here is one of the results of all this picky-picky-picking!

Warm blueberry muffins, right out of the oven!

I also love to make smoothies for breakfast.  Here’s Linda’s top-secret recipe for:

1/4 cup frozen blueberries (or any berries of your choice)

Buzz the ingredients in the blender and enjoy!  The frozen berries make it cold, like ice cream, only its full of good health.  Cheers! 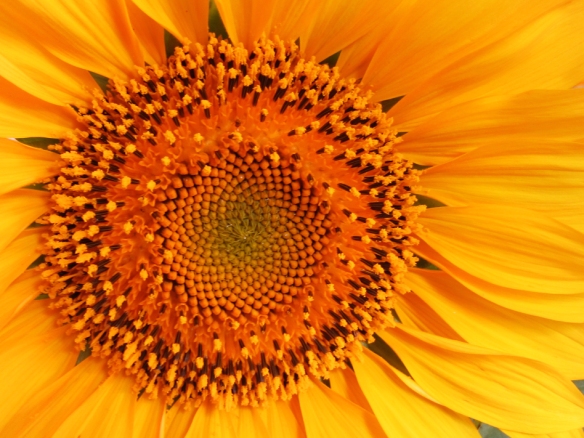 I was going to go sit by my husband on the front porch one day this week, when I discovered that “someone else” had already claimed that chair.  This little guy was perched on the top cross-bar of the chair back. 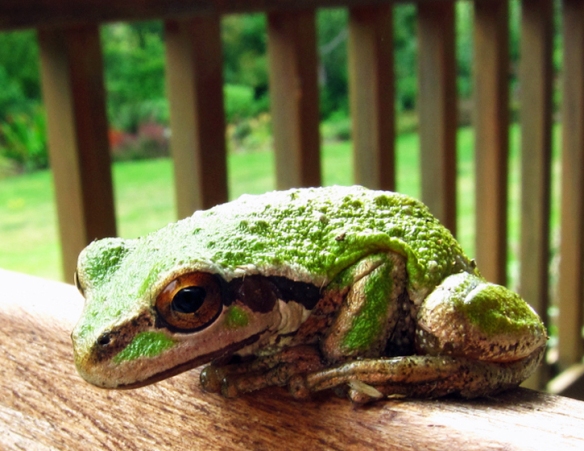 He (she?) sat there very patiently, while I ran into the house and got my camera.  I took macro shots from all different angles. 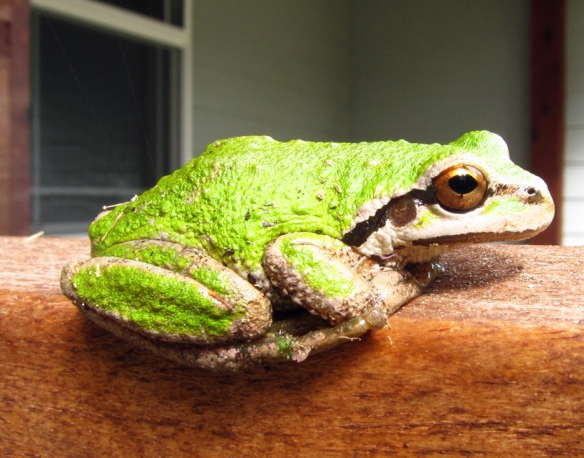 We have a protected wetland area behind our house.  Having so many frogs in the area is considered a sign that the wetlands have a healthy ecosystem.  This guy is a  Northwest Chorus Frog, and believe me, these guys can really sing! On spring nights their love songs are almost deafening.

A third grade class at Boston Harbor Elementary School in Olympia, Washington successfully proposed, to the state legislature, that the Northwest chorus frog should be the state amphibian.  And so,  in 2007, the Pacific chorus frog (Pseudacris regilla) became the official state amphibian .   Now why states need official amphibians, I don’t know.  But it was a cool project for the third graders!

After awhile the Mr. Frog grew tired of his photo shoot and started climbing down the chair.

Eventually he hopped onto the seat of the chair and then sprung off into the garden. 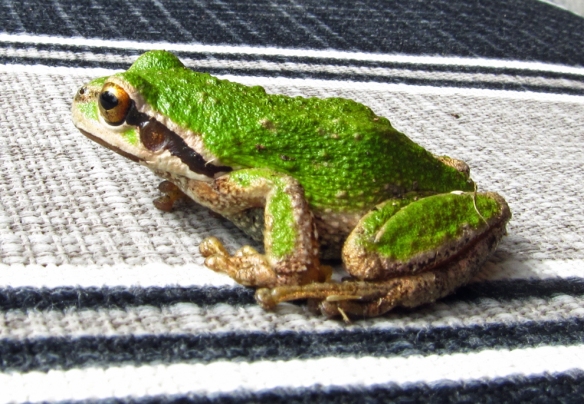 More goodies from the garden.  I made another bouquet and then took these close-up shots.: 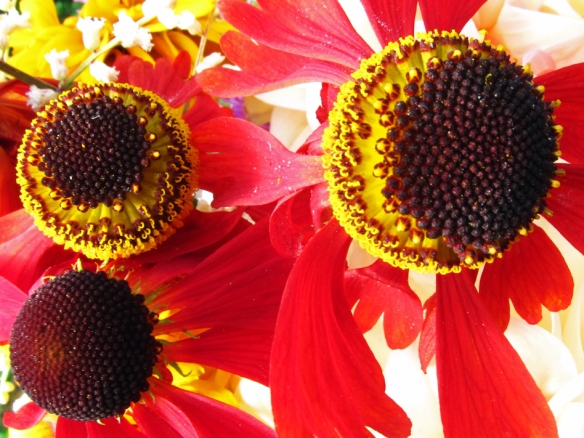 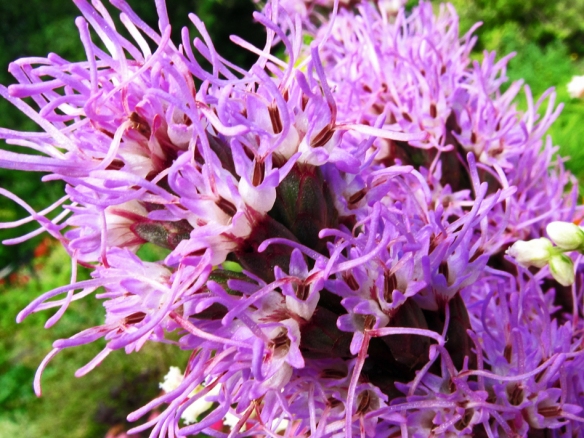 My husband is an amazing gardener.  I like to make floral arrangements, but I don’t actually like to garden.  He grows ’em and I cut ’em!  But today’s flowers have not come under the knife. 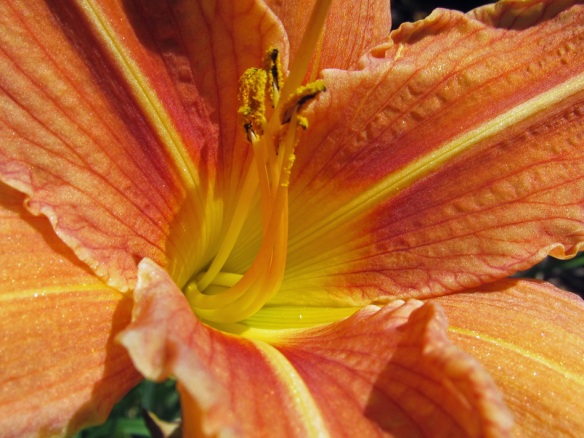 The FUSION  Summer Arts Festival, a fundraiser for homeless housing, took place on August 3rd.  This year’s theme was called Fantasia and it featured food and performing arts from several Asian countries.  On the stage were traditional songs and dance from Japan, and Chinese drumming and a dragon dance, to name a few.  Surrounding the stage and dinning tables were artist’s booths–including mine!

This was the first outdoor show that I had ever done, and to be truthful, I was quite nervous.  My friends, lampwork artists,  Jenelle Aubade and Dan Caracas loaned me their tent.  Another friend of mine (pictured below, on the left) helped me at the show.  I was especially grateful for her assistance in setting up and taking down the booth,  but she also kept me company throughout the show, helped customers and calmed my pre-show jitters.

This was also the first time that I had ever had two display tables.  I worried that I wouldn’t have enough jewelry and display pieces to really fill two tables.  It was a little sparse, but not embarrassingly so. I need signage and more jewelry busts, I think.  Other ideas?  I’d love feedback on how to improve my booth from those of you with more experience than I–or anyone with an idea!  Be honest!

I had laid out my camera to bring along with me, but somehow neglected to pick it up when I loaded up the car.  (*Curses under her breath*)  Jerry, the nice guy in the booth next to mine, took these two pictures and emailed them to me the next day.  If I’d had my camera along, I would have shown you pictures of some of the performers and the other booths.

I used Picnik photo editing to make my first(!) blog collage to show you a few of the items that sold.

As you can see, there is no particular trend here.  There’s dressy, casual, elegant, funky, sterling silver, copper, gunmetal, and brass.  I sold an absolutely wild, bright green and black, huge necklace to an artist before the show even started.  Unfortunately I don’t have a picture of it to show you.  It was so-o-o big, spiky and nearly-florescent green, that I thought it would never sell.  It had been passed over at shows for several years and I was starting to hate it!  But sometimes it just takes awhile for a piece to find its proper home.  The painter who bought it was a “live-your-life-out-loud” kind of gal and the necklace was perfect for her.  She put the necklace on right there, wore it throughout the show and pointed people to my booth, every time they commented on it. It makes me smile every time I think about it!

The show was the same week as the budget crisis impasse and the sales in most of the booths were down over the last year.  However there was also a silent and live auction, at which people made generous bids.  It was all for a good cause and I learned a lot by doing this show.

Click on this link for a slide show from the local news, if you’d like to see more pictures.  (My booth is not included in these slides).

I’d love to hear from you and I’m interested in suggestions for my booth.  Have a lovely weekend.